Oz Science Labs™ Gaba™ is a sophisticated formula packed full of ground breaking superfood ingredients. We have been helping men and women from all over Australia and the rest of the World support their well being for a very long time.

Directions: For adults,  take 1 to 2  capsules daily, preferably with a meal.

Capsules can be opened and sprinkled onto food or added to smoothies as desired.

Why GABA is a Super food

Why do we consider GABA a Superfood ?

GABA can be found in the following food products

GABA foods to your diet may be just as beneficial, if not more so, than a supplement. Many of the GABA foods are also rich in other health-promoting nutrients, including fiber, vitamins, minerals and antioxidants, and found on many nutrition superfood lists.

Foods with the highest GABA, according to a May 2018 review published in Nutrients, include:

As noted above, certain bacteria also produce GABA, which means fermented foods, such as yogurt, kefir and tempeh, can also help you get more GABA from the food you eat. The amount of GABA in food generally ranges from 1 to 40 milligrams per 100 gram serving, according to the study from the Journal of Clinical Neurology.

The highest GABA foods, according to an analysis published in the March 2003 issue of Preventive Nutrition and Food Science, include brown rice germ, sprouted grains and spinach.

FORMULATED SUPPLEMENTARY SUPER FOOD. NOT SUITABLE FOR CHILDREN UNDER 15 YEARS OF AGE OR PREGNANT WOMEN. SHOULD ONLY BE USED UNDER MEDICAL SUPERVISION.THIS PRODUCT IS NOT A SOLE SOURCE OF NUTRITION.

We make no therapeutic use claims regarding the use of this product.

There are no reviews yet.

Be the first to review “GABA Capsules” Cancel reply 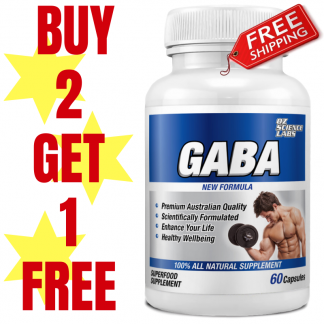